LIBERAL DEMOCRATS will call on the county’s three blue light services to develop new joint working projects at the last council meeting of the year in December. 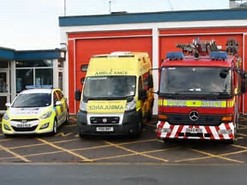 The Lib Dems, who are the main opposition party on Gloucestershire County Council, will be pushing for greater collaborative work between the county’s police, ambulance and fire services.

The Policing and Crime Act 2017, which received Royal Assent on 31st January 2017, places a statutory obligation on emergency services to collaborate. This does not affect the status of existing link ups between the emergency services, but instead provides a clear legislative framework within which agreements can take place going forward.

Emergency services will however only be required to collaborate where the agreement would be in the interests of its efficiency or effectiveness.

“I welcome the decision of the Police & Crime Commissioner, Martin Surl to withdraw his bid to takeover the governance of our fire and rescue service. We can now move forward and develop new collaborative projects as equal partners.

“Successful partnerships are based on tough negotiations to deliver shared outcomes. Our TriService headquarters and workshops, which were opened when I was the cabinet member, are fine examples of what can be achieved. Gloucestershire Fire and Rescue Service also supports the ambulance service by co-responding to medical emergencies, which is saving lives.

“Our motion calls on the three blue light services to develop further collaborative projects, which could include shared facilities at our community fire stations. I understand that Nigel Moor the county council’s current cabinet member for fire is up for the challenge, I hope Martin Surl and the ambulance trust are also ready to positively engage.”

Leader of the Liberal Democrat Group, Cllr. Paul Hodgkinson (Bourton and Northleach) wants to see the fire and police services working out of shared premises where it’s practical to do so:

“There is definitely scope for the police to have a presence in rural fire stations such as Northleach. I know that people in our county are very concerned about crime and the lack of visible policing on the ground in some areas so if community policing can be brought back to where it was previously people would welcome that very much.

"“We know that there is already a lot of successful collaboration happening between the services. Getting the fire, police and ambulances to work more closely together can only benefit residents.

“For example, last year, a new ‘Cardiac Care’ initiative was launched serving local communities across the county. As part of their basic training, firefighters already have the skills to assist those in cardiac arrest. Firefighters respond to certain emergency incidents in the precious few minutes before an ambulance arrives, which makes the difference in a life and death situation.

“Our valuable blue light services should continue working together and do more of it for the benefit of everyone.”