A motion to try and tackle mental health problems in schools, colleges and Universities will be debated at Gloucestershire County Council next week. 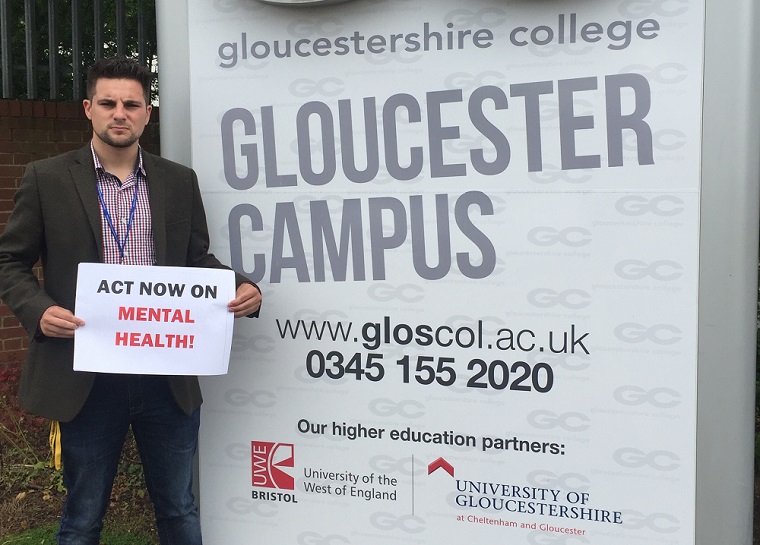 The survey was in response to concerns about the increasing number of students with mental health difficulties in further education establishments.

Increases in the number of ambulance call outs at Universities for incidents of self-harm and suicide attempts have also been recently reported by the national media.

The Liberal Democrats now want the council to conduct a thorough enquiry through the creation of a ‘cross-party’ student mental health task group inviting a number of agencies to determine the scope of the problem amongst students in the county’s 26 school sixth forms, 4 FE colleges and 2 Universities.

“It’s good to see that mental health has shot up the agenda in recent years, everyone at some point in their life will have some sort of mental health issue.

“I’ve had local colleges approach me directly with huge concern at the current situation and it is for this reason that we must do something to raise awareness and tackle the rising problem.

“Presently, we don’t know the true extent of the crisis in Gloucestershire, that’s why I want to see the creation of a task group to get a detailed picture of what’s going on and a comprehensive report with recommendations to be brought back to a future council meeting.”

“Schools, colleges and universities are experiencing a real challenge with the amount of students presenting with mental health problems. There is no formal funding available to provide support, this needs to change and I hope the motion I’m putting forward will start to address this issue in Gloucestershire.”

“The national statistics speak for themselves, what we are seeing is an alarming increase in the number of mental health problems amongst the student population. The reason it’s a mental health crisis is because it deeply impacts on social cohesion, skills, economic development and opportunities for young people.

“As a former Principal of a college I would like to know how big the problem is, here, in Gloucestershire and also what approaches are being taken across the area to support and monitor those students who are suffering from mental health issues.”

The Liberal Democrat motion will be debated in the Council Chamber at Shire Hall on Wednesday 29th June 2016.

The motion to be debated at the Council Meeting on Wednesday 29th June is as follows:

This Council notes the findings from the survey carried out by the Association of Colleges (AoC) in response to concerns about the increasing number of students with mental health difficulties in further education colleges.

This Council is concerned that there has been an increase in mental health problems amongst students in the county’s twenty-six school sixth forms, four FE colleges and two universities.

This Council commends the range of support that is already being provided by the Council to sixth-forms, colleges and universities, but wants to explicitly identify what joined-up approaches are being taken in the county to tackle and monitor the perceived increase in mental health problems amongst specifically students in Gloucestershire.

This Council therefore resolves to create a cross party student mental health task group that will invite evidence from school sixth forms, FE colleges, local universities, the Gloucestershire Suicide prevention Partnership Forum (GSPPF) and providers of mental health services in order for a comprehensive report with recommendations to be presented back at full Council in February 2017.