Bid to lower voting age will be debated by councillors

Liberal Democrats in Gloucestershire are putting the spotlight on lowering the voting age to 16. 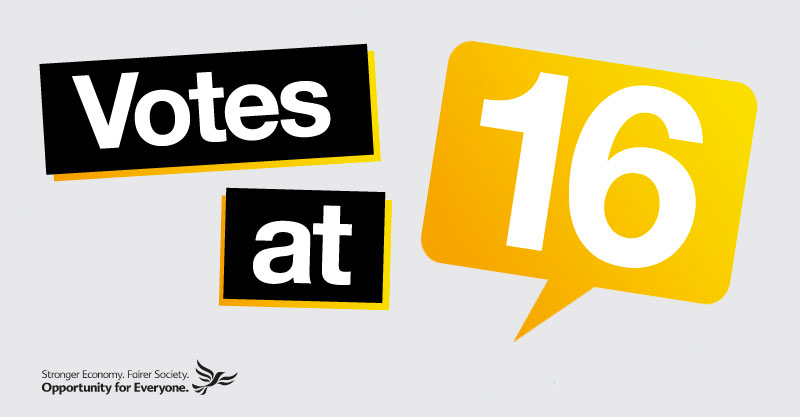 Lowering the voting age to 16 has also been a campaign for the UK Youth Parliament for several years with over 100,000 young people in November last year voting it as their top campaigning priority.

Now the county's Lib Dems feel this issue should be high-up on the political agenda.

Group Leader of the Liberal Democrats, Cllr. Paul Hodgkinson (Bourton and Northleach) is calling for 16 year olds to get the vote. He will be leading a debate at Shire Hall at the County Council Meeting on Wednesday 13 September and said:

“For years young people have shown an active interest in politics and yet when it comes to the ballot box their voice remains silent. We saw more under 24’s voting than before in this year’s General Election too.

“I know many young people who have very strong opinions on a wide variety of issues. It is ridiculous that in spite of all the things 16 and 17 year olds are legally able to do, they still do not have the right to vote in elections. Yet they can get married, work, pay tax and fight for their country. It doesn’t make any sense.

“In last year’s EU referendum, we saw unfair restrictions placed on those that actually have the longest stake in the future of this country, it wasn’t right that 16 and 17 year olds were denied a vote in a decision that has altered our nation’s course.

“After hearing from our county’s representatives of the Youth Parliament about this particular issue it made me realise that it really is about time 16 and 17 year olds are given the right to vote in all elections. This is about giving a voice to young people in our country.

“I hope elected members across the chamber will support my motion and with one voice we can show all six Gloucestershire MPs that they have our backing in lowering the voting age to 16.”

“It is deeply pleasing to see that votes for 16 will be debated at the County Council meeting in September. This will both hopefully enthuse many young people in Gloucestershire but also bring the wider debate to discussion.

“We look forward to hearing the result and hope all political parties will support this motion.”