LIBERAL DEMOCRATS in Gloucestershire are putting the spotlight back on lowering the voting age to 16 after accusations of Tory filibustering were made which prevented the debate in September. 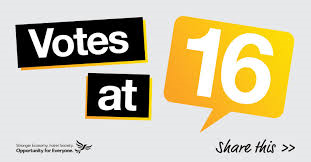 Both locally and nationally, the Liberal Democrats have campaigned for years to allow 16 years the right to vote. They were also at the forefront of laying down an amendment in parliament back in 2015 that would have given 16 year olds a vote in last year’s EU referendum.

Group Leader of the Liberal Democrats, Cllr. Paul Hodgkinson (Bourton and Northleach) will be leading the debate calling for 16 and 17 year olds to get the vote at the County Council Meeting on Wednesday 6 December.

“It was extremely disappointing to witness at the last County Council Meeting in September the Conservatives using every trick in the book to scupper the debate on lowering the voting age to 16. The same contempt for young people by the Conservative Government was also shown in parliament at the beginning of November during the reading of a Private Members Bill to extend the voting age to 16 and 17 year olds.

“I'm pleased to say that the debate to lower the voting age will now happen next week. This is a really positive proposal and I hope it gets full support."

“We owe this debate to the young people up and down the country who at present have no say over the decisions that will have a lasting impact on their own lives.”

Cllr. Klara Sudbury (Charlton Park & College) who will be talking in support of next week’s calls to lower the voting age to 16 also said:

“It gives me great pleasure in speaking out for the rights of young people and I am delighted that the Liberal Democrats have for many years been at the forefront of giving 16 and 17 year olds the vote.

“I am aware that lowering the voting age to 16 has been a top campaigning issue for the UK Youth Parliament with over 100,000 young people in November last year voting it as their number one priority. It is heartening that young people across the country are lobbying MPs and local councillors to get the support they need in order to be able to participate at the voting booth.

“I fully support this campaign in giving all 16 and 17 year old the right to vote and look forward to the day when this finally happens as it will be an incredibly momentous decision in the history of democracy for our country.

“Until then, I strongly urge all members across the chamber next week to listen to the voices of young people support the motion and show all six of our Gloucestershire MPs that they have our backing in lowering the voting age to 16.”

Members of Gloucestershire's Youth Parliament (MYPs) are expected to observe the debate in Shire Hall and have expressed delight that the issue is being raised locally.