One of the two options for fixing the notorious A417 at the Air Balloon has today been backed by the County Council’s Liberal Democrats. 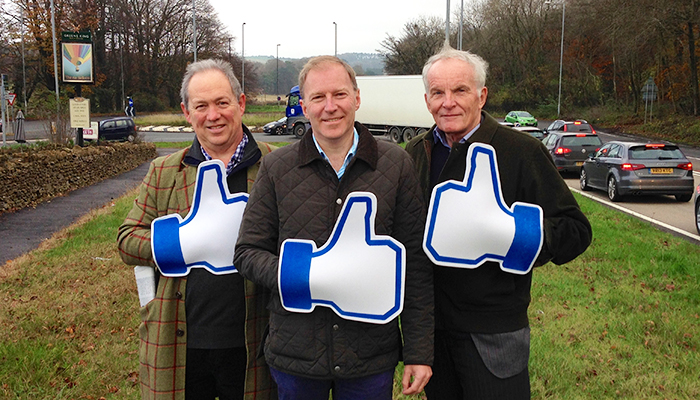 Last month, Highways England launched a 6 week consultation into two schemes they believe will fix the triple problems of gridlock, pollution and accidents at Gloucestershire’s number one traffic blackspot.

The two options on the table both have new roads looping around the existing single carriageway road at Birdlip and the Air Balloon roundabout. Highways England have tabled ‘Option 30’ as their preferred choice. It includes a dual carriageway in the Cirencester to Gloucester direction and three lanes coming uphill from Shurdington.

Now, after meeting at Shire Hall, the county’s Lib Dem group has come out in favour of ‘Option 30’ and pledged its support for getting the scheme underway as quickly as possible.

Cllr Paul Hodgkinson, Leader of the County Council Liberal Democrats, represents the Air Balloon area and says his group are 100% behind the scheme: “Having campaigned persistently for a solution to all the problems at the A417 we feel we must get behind the most realistic option. If we prevaricate now the chance to fix this decades old problem will slip away. I’ve talked to local residents and the overwhelming majority go with this option.

“We say loud and clear that we support Highways England’s preferred option and I will be writing to them to give it our total support. We owe it to the many who are held up at this blackspot and to the many who have had accidents there. Let’s get behind this option and get it sorted!”

Cllr Iain Dobie, Deputy Leader, (Leckhampton & Warden Hill) also backs the project: “I welcome that realistic options for sorting out the longstanding A417 "Missing Link" are at last being seriously considered. For years many Cheltenham and Gloucester people have been forced to drive through this dangerous bottleneck.

“Now, thanks to the lobbying of local Liberal Democrat councillors and others, it looks as though we are finally moving towards a practical and cost-effective solution. We are pushing for GCC to adopt "option 30", on the basis that this new stretch of dual carriageway is both deliverable and already enjoys general support within immediately affected communities.”