An albatross unwittingly feeding plastic to their young. A sea turtle hopelessly ensnared in floating debris. A whale calf poisoned by her own mother’s contaminated milk. The most celebrated and watched programme of 2017 was also the most sobering. 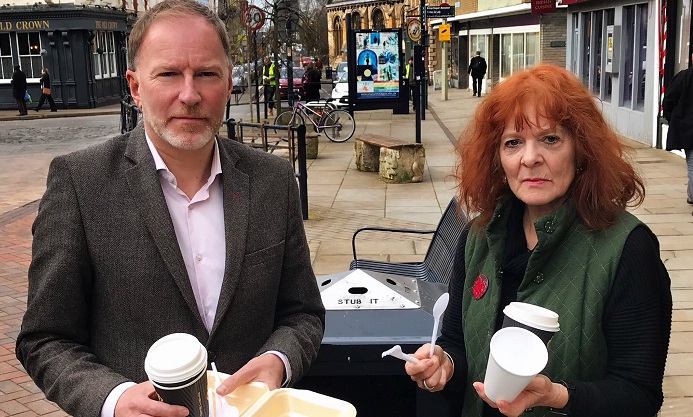 Blue Planet II brought to life the staggering impact that our consumerist, throwaway culture is having on our seas.  It is estimated that 9 million tonnes of plastic waste enters our seas and oceans every year, causing immense damage to marine life and the environment. Single-use plastics (SUPs), such as straws, plastic bottles and disposable coffee cups are not widely recycled, and can take up to 900 years to degrade, breaking into fragments that permeate the food chain.

The Foresight Future of the Sea report, published this week, states that the amount of plastic litter currently in our oceans will treble over the next decade, if significant changes are not implemented.

The government recently announced their 25 year ‘green plan’, which aims to end all avoidable plastic waste by 2042, but received criticism from environmental groups for not going far enough and for failing to recognise the immediacy of the issue.

At the county council meeting on the 28th March, Cllr Eva Ward (Green, Stroud Central) will propose a motion that, if passed, will see Gloucestershire County Council become a SUP-free council by 2019, ensuring that all items such as bottles and cutlery are replaced with sustainable alternatives.

It’s also hoped that the Leader of the Council will write to local MPs and to the Secretary of State for Environment, Food and Rural Affairs, to urge them to consider legislation and regulation that would reduce our consumption of SUPs nationally.

Cllr Ward said, “The success of Blue Planet II means that, as a society, we can’t plead ignorance any more. We know how harmful single-use plastics are to the environment and when there are so many alternatives available, there’s no reason to continue as we are. I was pleased when the government brought out their ‘green plan’, but the research published this week shows that we simply don’t have the luxury of time, and if we leave taking real action until 2042 then we will have damaged our oceans irreparably.
We all have a duty to tackle this crisis and it’s time for Gloucestershire County Council to take the lead, be ambitious and to do something that will genuinely make a difference”

Leader of the Lib Dem group at GCC, Cllr Paul Hodgkinson (Bourton & Northleach), who is seconding the motion, said, “The prevalence of plastic in our seas and oceans is an incredibly important issue and one that the Liberal Democrats as a party is committed to tackling. The success of the ‘plastic bag levy’, brought in during the coalition government, was a relatively minor move that has led to an 85% reduction in disposable plastic bag usage. Now I think GCC should go one step further. By becoming a single-use plastic-free council, and by educating Gloucestershire residents about the impact of SUPs on the environment, we can ensure that our county leads on this issue and plays its part in protecting our environment for future generations”